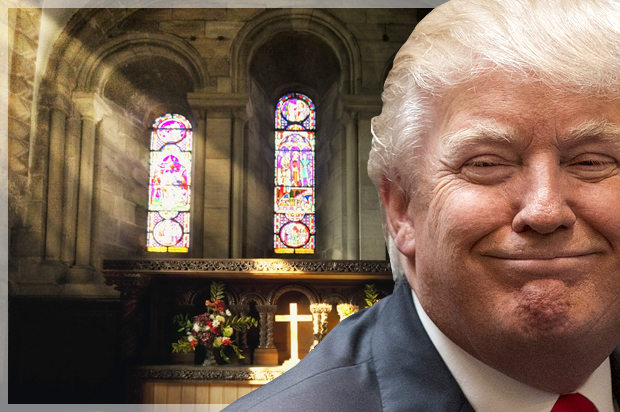 The number of evangelicals supporting Donald Trump is a complete surprise. They are not a majority, but they are a large minority; and they have delivered him victories in several Southern (and other) states. Apart from the evangelicals, it’s possible Trump wouldn’t be leading the GOP presidential race.

Why are so many supporting him? The best explanation, offered in mid-January by David Brody of CBN and more recently by politically conservative commentator Charles Krauthammer, is that they are looking for The StrongMan to protect them from an increasingly hostile society. As I wrote recently:

Why would evangelicals flock to the candidacy of Donald Trump, a philandering, thrice-married, profane Manhattan businessman? One chief reason is that many of them have given up on the “culture wars”: they just want a president who will protect their religious liberty in a time of rising persecution (if you don’t believe it, just try refusing as a business to bake a cake or create a flower arrangement for a gay wedding). Evangelicals of the 70s – 90s were “values voters” — they wanted a Christian candidate who championed life, family, and civic virtue. They longed and worked for a national revival and reformation, and politics did not exhaust but was included in that program. That program is changing. Feeling they’ve lost the culture (the Obergefell decision was a tipping point), evangelicals simply want a “strongman” who will keep the secular statist wolves out of their flocks and families.

This mad evangelical rush to the foul-mouthed, fornicating, non-forgiveness-seeking StrongMan says more about them than him.

A Political Lesson from Back in the Day

In the Old Testament (2 Kings 18) we encounter a historic event whose lesson it would behoove the Trump-ite evangelicals to learn. The Jewish kingdom, because of King Solomon’s idolatry and immorality, had been divided into the north (Israel) and south (Judah). Israel was fully apostate, and Judah was only mildly more faithful to God. God finally sold Israel into the bondage of Assyria, who repopulated it with foreigners. By contrast, Hezekiah, the God-fearing king of Judah, abolished public idolatry, restored godly worship, and would not be intimidated by the Assyrian king at his border. For his obedience, God blessed Hezekiah.

But a few years later a new Assyrian king, Sennacherib, arose, and in his territorial expansion moved against Judah and laid siege to it and captured its outlying cities. Hezekiah, rather than calling on the Almighty God of heaven and earth, apologized to Sennacherib and agreed to pay tribute to him to avoid capture. The tribute? Silver and gold ripped from the furniture and walls and doors of the holy temple of the Lord.

Hezekiah was willing to trade away the precious metals sanctified to the Lord God in order to buy some time and protection from a pagan king.

Like King Hezekiah, Trump’s evangelical supporters are running scared. They are willing to dismantle and sell off their sanctified testimony to buy a little time and protection from a depraved, narcissist, greed-driven playboy (in biblical terms, as Brian Mattson, notes, he is a fool). Observing the rapacity of secular progressivism (Barack Obama, Hillary Clinton) that, far from committed to neutrality, wishes to bulldoze Christian culture, the family, the church — anything Christian except what goes on between Christians’ two ears — too many Christians succumb to the fear of man. In times of trials of faith, the people of God are tempted to pay the depraved protection racket — the ungodly getting rich off the fear of the godly. In actuality, at this very point they should blurt to their secular political enemies:

Why do the nations rage[a]

and the peoples plot in vain?

The kings of the earth set themselves,

and the rulers take counsel together,

against the Lord and against his Anointed, saying,

“Let us burst their bonds apart

and cast away their cords from us.”

He who sits in the heavens laughs;

the Lord holds them in derision.

Then he will speak to them in his wrath,

God finds the rebellious, power-mad politicians amusing. History is littered with the defeat and destruction of political rulers with the audacity to unrepentantly defy God. God always wins. They always lose.

Evangelicals should indeed fear a mighty political ruler. They are simply fearing the wrong one.

Is it too late for them? Maybe not. In 2 Kings 19 we learn that Hezekiah, after discovering that Sennacherib wasn’t satisfied with God’s gold but lusted for even more of God’s inheritance, turned to the Lord in great humility, and God executed a great deliverance to Judah as a result of his agonizing prayer.

It was the message of God’s prophet Isaiah to Hezekiah that gave him courage finally to rely on the Lord God and resist Sennacherib:

When the servants of King Hezekiah came to Isaiah, Isaiah said to them, “Say to your master, ‘Thus says the LORD: Do not be afraid because of the words that you have heard, with which the young men of the king of Assyria have reviled me. Behold, I will put a spirit in him, so that he shall hear a rumor and return to his own land, and I will make him fall by the sword in his own land.’” (vv. 5–7)

Brothers and sisters: we serve the sovereign God, the great God of heaven and earth, for the nations are a drop in the bucket” (Is. 40:15).

Trust God, not Trump. The Trumps of this world rise and fall. God alone — and his people— abide.