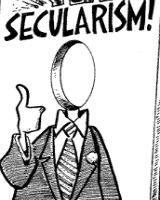 We live in a radically and increasingly secular society. This secularization has several prominent historical roots, and it would be reductionist to attribute it to only factor. My point isn’t so much to offer a genealogy, however, but a brief diagnosis.

First, we need to know what secularism is.

Secularization doesn’t mean that people no longer believe in God. It means that people no longer believe that God has any interest in culture. “[T]he process of secularization,” states Christopher Dawson, “arises not from the loss of faith but from the loss of social interest in the world of faith. It begins the moment men feel that religion is irrelevant to the common way of life and that society as such has nothing to do with the truths of faith.”[1] It’s possible for many people in a society to believe in God and Christianity and still live in a secular society. This is precisely the case in the West, and even in North America. Secularization isn’t the conviction that God doesn’t exist (it isn’t the same as theoretical atheism). It’s the idea that God doesn’t exist in any influential way in a society. Cultural secularists are rarely interested in what we’d call metaphysical issues; they just don’t want God or any religion crimping their style, and especially their sex lives. Secularization is the abolition of the Triune God from everywhere except between anybody’s two ears or, at best, the family, and the church between 10:00 a.m. and noon on Sunday. Secularization means that God and Christianity simply have no official or formal bearing (and have, in fact, practically no bearing at all) on politics, education, art, science, architecture, music, technology, media and so on.

This secularism has created a massive plausibility structure. By that I mean, it has remanded Christian truth as culturally relevant to the far reaches of society. It has de-privileged Christian discourse. It has ruled it not wrong, but simply out of bounds. Secularism is a faith so widespread that it no longer needs to be defended or even promoted tenaciously. Almost everybody holds it, and to believe differently is not so much to be opposed as to be ignored. Racial equality (for example) is part of our plausibility structure (it also happens to be biblically correct). People today in the West who claim that Whites or Asians are superior to Blacks or Hispanics aren’t persecuted; they are ignored as kooks and cranks. Yet 250 years ago, this was an idea that was hotly disputed in the populace, including by educated elites. By contrast, if you say today that marijuana should be legalized, you’ll get a real fight on your hands. That’s because pot legalization is not a segment of the plausibility structure like racial equality is.

Secularization is one of the great plausibility structures of our time, and perhaps the chief one. If you contend that Christianity in the West should govern science and music and politics and education and sports and architecture and music (say, like it did 400 years ago), people will say, in effect, “This is the kind of arrangement they have in Islamic societies; nobody here believes that. Please get a life and leave the rest of us alone. You’re delusional. Do you also believe in the tooth fairy?” The fact that it is secularists who would have been deemed delusional 400 years ago shows how plausibility structures can change dramatically over time. In 1613 Christian culture was the rule. In 2013 it is not an exception; it is unthinkable.

The Tyranny of the Majority

I think immediately of the haunting prediction of Alexis de Tocqueville, author of Democracy in America. He was the famous Frenchman who visited the States in the 19th century. He was a keen observer of the United States, and many of his predictions have uncannily proven true. He writes of the “tyranny of the majority.” This is a tyranny in democratic states that is more dangerous than the tyranny of the old despots. He writes:

Fetters [chains] and headsmen [executioners] were the coarse instruments that tyranny formerly employed; but the civilization of our age has perfected despotism itself, though it seemed to have nothing to learn. Monarchs had, so to speak, materialized oppression; the democratic republics of the present day have rendered it as entirely an affair of the mind as the will which it is intended to coerce. Under the absolute sway of one man the body was attacked in order to subdue the soul; but the soul escaped the blows which were directed against it and rose proudly superior. Such is not the course adopted by tyranny in democratic republics; there the body is left free, and the soul is enslaved. The master no longer says: “You shall think as I do or you shall die”; but he says: “You are free to think differently from me and to retain your life, your property, and all that you possess; but you are henceforth a stranger among your people. You may retain your civil rights, but they will be useless to you, for you will never be chosen by your fellow citizens if you solicit their votes; and they will affect to scorn you if you ask for their esteem. You will remain among men, but you will be deprived of the rights of mankind. Your fellow creatures will shun you like an impure being; and even those who believe in your innocence will abandon you, lest they should be shunned in their turn. Go in peace! I have given you your life, but it is an existence worse than death.”[2]

Secularization is the “tyranny of the majority.” It is a huge hindrance to Christian culture because its hostility is so invisible — it’s how the majority peacefully tyrannizes Christians. As long as it remains invisible, it’s very safe in its pernicious depredations. You’ve perhaps heard the Chinese proverb, “If you want a definition of water, don’t ask a fish.” The point is that once we invest in plausibility structures, it becomes very hard to evaluate them. The advantage of work by unbelieving scholars like Stanley Fish[3] (no pun intended) and Christian scholars like Herman Dooyeweerd [4] is to rip the mask off the pretended autonomy of modern faiths like secularism. The alleged bonanza of secularism is its reputation as a neutral, rational arbiter among competing worldviews. It sets the ground rules of all social debates. All worldviews have vested interests and agendas, and secularism assures they treat each other fairly in public discourse.

Secularism is an almost impregnable hindrance to Christian culture, and it will remain impregnable until Christians — and others — discover how false its benign pretensions really are.