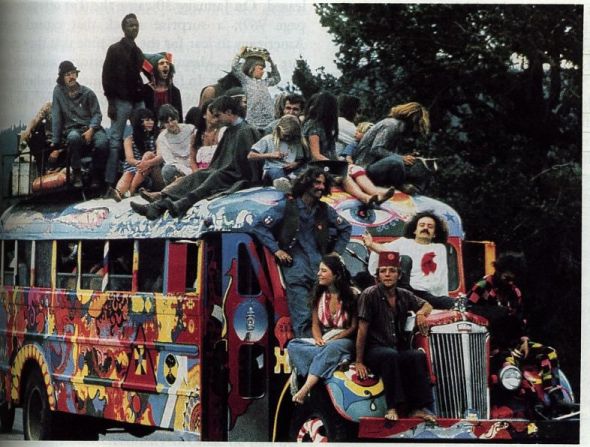 Thomas Frank’s best-selling revisionist retelling The Conquest of Cool counters the prevailing sociological interpretation of the 60’s, according to which the fresh, revolutionary “young culture” broke free of the hierarchical conformities of the 50’s — the business, political, artistic, educational, and moral conformities of their parents and grandparents — and established a fresh new egalitarian culture. In the conventional telling, business was one of the great defenders of the conformist tradition, and the capitalists were the authoritarians against whom the young egalitarians revolted. The goal, wrote Norman Mailer in 1957 [!] “was to tear oneself from the security of physical and spiritual certainty, to live for immediate pleasures rather than the postponement of gratification associated with the ‘work ethic,’ ‘to divorce oneself from society, to exist without roots, to set out on that uncharted journey with the rebellious imperatives of the self.” One “exists for ever-more-intense sensation, for immediate gratification, for ‘an orgasm more apocalyptic than the one which preceded it” (p. 12). This in 1957. It was the “innocent youth,” uncorrupted by the banal standards of their elders in business, church and politics, who would revolt against conformity — led, of course, by the culturally revolutionary vanguard like Mailer. This is the narrative.

Only it isn’t true. Frank enlists impressive evidence that a wide swath of society was already complaining about the sterility and convention of modern culture.  Widely read and hailed books on business management were lionizing the creative, egalitarian workplace 30 years before Silicon Valley championed as its model employees the thirtysomething t-shirt and flip-flop  code-writers collaborating as utter peers in a large environmentally friendly nuclear-free flat. In 1951 Fortune magazine carried an article (title borrowed from Trotsky) “U.S.A. The Permanent Revolution.” In 1951. Frank lists books and articles with very traditional readerships that boldly critiqued the insincerity, plasticity, inauthenticity, and conformism of 50’s (and earlier) culture. The businessmen were saying it. The Establishment was saying it.

But Frank makes his case more simply and powerfully: such massive cultural changes as the 60’s wreaked cannot have happened without the willing collaboration of large parts of society. Richard Nixon may have won the presidency by appealing to “The Silent Majority” who recoiled before TV images of the Martin Luther King and Kennedy assassinations and the riots at the 1968 Democratic National Convention, but that majority kept right on silently acquiescing in the altered standards exhibited in normalized birth control, promiscuous sex, government redistribution programs, aversion to the Vietnam War, and recreational drug use. The children and grandchildren of that “Silent Majority” haven’t reversed those 60’s mores. Not by a long shot.

The 60’s generation won the culture, but it won with the tacit (and sometimes explicit) approval of the 50’s and 40’s and 30’s generation.  “The meaning of ‘the sixties,'” writes Frank, “cannot be considered apart from the enthusiasm of ordinary, suburban Americans for cultural revolution” (p. 13). The real revolutionaries were the silent revolutionaries at home and hearth.

Frank’s thesis leads to a sobering conclusion: the conservatives thrashing the 60’s revolutionary elite that sent to country to Hell in a hand basket have a whole bigger target — 20th century culture itself with its obsession first with Enlightenment conformism and, in pendulum-swinging reaction, Counter-Enlightenment (Romantic) non-conformism — which with the business community has become the new conformism.

It means that the 60’s are not the cultural dividing line in the United States that many conservatives suppose, and that turning back the cultural clock to the 50’s will not help solve the problem.

The 50’s (and earlier) were the problem.