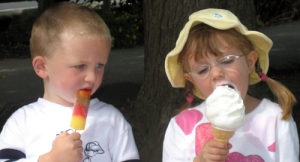 The front page of the May 1, 2014 issue of the reliably radical New York Times carried an article by Annie Lowrey about the current Congressional minimum wage debate. It starts with this stark admission:

Is a family with a car in the driveway, a flat- screen television, and a computer with an Internet connection poor?

Americans — even many of the poorest — enjoy a level of material abundance unthinkable just a generation or two ago. That indisputable economic fact has become a subject of bitter political debate this year, half a century after President Lyndon B. Johnson declared a war on poverty.

Starkly different views on poverty and inequality rose to the fore again on Wednesday as Democrats in the Senate were unable to muster the supermajority of 60 votes needed to overcome a Republican filibuster of a proposal to raise the incomes of the working poor by lifting the national minimum wage to $10.10 an hour.

House Republicans, led by Representative Paul D. Ryan of Wisconsin, have convened a series of hearings on poverty, including one on Wednesday, in some cases arguing that hundreds of billions of dollars of government spending a year may have made poverty easier or more comfortable but has done little to significantly limit its reach.

Indeed, despite improved living standards, the poor have fallen further behind the middle class and the affluent in both income and consumption. The same global economic trends that have helped drive down the price of most goods also have limited the well-paying industrial jobs once available to a huge swath of working Americans. And the cost of many services crucial to escaping poverty — including education, health care and childcare — has soared.

“Without a doubt, the poor are far better off than they were at the dawn of the War on Poverty,” said James Ziliak, director of the University of Kentucky’s Center for Poverty Research. “But they have also drifted further away.”

This article acknowledges, if only tacitly, one of the striking facts of modern economic radicals (I can no longer describe them as liberals; as Barry Rubin has recently documented in Silent Revolution: How the Left Rose to Political Power and Cultural Dominance, what passes for political liberalism today breaks sharply with the American liberal tradition and is much more akin to Marxism): it’s not poverty the radicals are eager to abolish but rather inequality. The Times article is noteworthy because of its bluntness and frankness in acknowledging this radical agenda.

A poverty of which dreams are made

How is it possible to describe a family or individual with a “car in the driveway, a flat-screen television and a computer with an Internet connection” as “poor”? By every historic standard, and by the standard in many Third-World nations today, this scenario describes wealth, not poverty. Fifty years ago many Americans, and many sub-Saharan Africans today, could only dream of such an impoverished life. Bring on the poverty!

The definition of poverty is apparently elastic. It’s reasonable to describe as poor both (1) African mothers who must walk 3 miles a day for fresh water and for a simple subsistence meal for their children, and (2) a single, unemployed American mother who lives with her children at a Salvation Army shelter and enjoys with them three square meals a day. Both are poor (though not equally poor).

But poverty’s definition is not infinitely elastic. The 60s Lyndon Johnson Poverty Warriors to whom the Times article refers would have declared victory in their war if the “working poor” of the time had achieved “a car in the driveway, a flat-screen television and a computer with an Internet connection.” To the original Poverty Warriors, that’s not a description of poverty, but of middle-class and perhaps even upper-middle-class wealth — in the words of Lowrey “a level of material abundance unthinkable just a generation or two ago.” If it was poverty they were trying to defeat, they got their wish. The war is over. [1]

But today’s radical Poverty Warriors should be re-designated Inequality Warriors. The overwhelming majority of Americans enjoy the fruits of a basically free-enterprise system. That’s what gets them their cars, TV’s, computers, and Internet, not to mention three square meals a day plus chips and guacamole, a smart phone, a Netflix account, a gym membership, and perhaps even tickets to the latest Coldplay concert. Whatever their problem may be, it’s not poverty, at least not by any reasonable standard.

It’s the relative disparity, not the poverty, which so annoys, angers, and animates the Inequality Warriors. It’s just not fair that some people have more than others. This unfairness demands a crusade to abolish it. To employ the language of Gandalf the Gray, that monstrous unfairness shall not pass.

Whatever may be the merits of this crusade, it has almost nothing to do with poverty and should never be conflated with it. Still, the term “poverty” is a clever rhetorical device, and upholstering inequality abolition with the veneer of poverty abolition lends instant credibility to the program. What’s not to like about abolishing poverty?

More pernicious still, it validates and institutionalizes one of the chief sins of humanity: envy. What makes envy so pernicious is not that it refuses to be satisfied until the relatively disadvantaged have-nots join the ranks of the relatively advantaged haves but, rather, it refuses to be satisfied until everybody is a relatively have-not. For the envious, it’s better for everybody to be poor than for most people to be moderately wealthy while some are exceedingly wealthy.

The malevolence of envy

This is why malevolence is at the root of envy, just as hatred is at the root of murder (whoever hates his brother in his heart is a murderer, the apostle John wrote in 1 Jn. 3:15a). To succeed, envy must harm. This is why economic envy is much more pervasive under socialism than the free market. While envy among capitalists is certainly a reality, the free market can never guarantee the final success of envy. That is to say, cannot guarantee the destruction of the conditions of envy. Only socialism to do that. Analogy: anti-Semitism may have been pervasive in Germany’s Weimar Republic, but it took the conditions of Hitler’s National Socialism to fully satisfy anti-Semitic bloodlust. Likewise, socialism furnishes the conditions for economic envy’s final gratification.

It is for this reason that the War on Poverty inevitably morphed into the War on Inequality. Poverty is an ameliorable human condition, but envy burrows its way into the human heart. If we are irate that other people have more material possessions than we do, we’ll never be satisfied simply by getting more material possessions. It’s not the getting more that animates us but the not having as much.

This pervasive envy is a (the) razor-sharp weapon of the Inequality Warriors. Its concrete expression is class warfare, employed skillfully by the Marxists, modernity’s earliest Inequality Warriors. Class warfare is especially effective in a liberal democracy, because a majority of the population never owns as much as a minority, and shrewd, unscrupulous politicians can enlist the desires of a moderately wealthy but envious majority to legally confiscate the property of the wealthier minority.

This, in fact, and quite simply, is the program of the Inequality Warriors.

But it is much harder to make the PR sale by bluntly, honestly acknowledging: “We know that the free market has ended almost all poverty in the United States, but in ending poverty, it has also created inequality. People have more and more than they ever did, but more people have differing amounts of the more and more than they ever did. We’re envious of those who have more of the more and more, and we want to use the coercive power of the state to make sure everybody has less of the more. We’re willing to bring privation on our entire society just to satiate our envy.”

No. It’s much more appealing to say, “People who have less of the more and more are living in poverty, and our job is to eliminate their poverty.”

That is a lie, but it’s a decorous lie, and it’s a lie that envious people lust to believe.

And, in particular, envious political crusaders.

[1] Which is not to say that the Poverty Warriors’ policies won that victory. The great economic expansion following the deregulation and tax cuts of the 80s and 90s created unprecedented wealth that benefited every single member of American society.